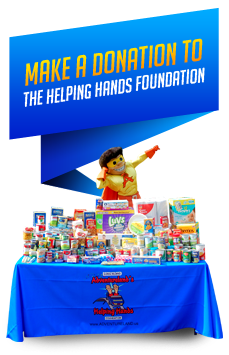 We recognize the very special legacy of Vivian & Tony Gentile by awarding scholarships each year—we have awarded over $200,000 to Long Island Students since this program’s inception in 2016.

Adventureland has been a Long Island institution since 1962; providing a safe place for generations of families to spend time together and to make memories has been the goal of the Farmingdale amusement park since its inception. Although many Long Islanders are familiar with the park’s classic rides, tasty treats and annual traditions like Pumpkin Park and fundraising nights, only few were lucky enough to know one of the men behind the Adventureland we know and love.

Tony Gentile was many things; a risk-taking businessman, an apprenticed butcher, a New Yorker from Brooklyn just to name a few. However, first and foremost, he was a family man. The father of 5, grandfather of 17, married Vivian, the love of his life, after they met in business school. Tony began a lifelong journey into the business world, with nothing but the support of Vivian, his family, and his friends. His first job was as a butcher in Brooklyn. By the time he and Vivian were young parents, Tony and his two younger brothers eventually outgrew the small butcher store they worked in and decided to pursue the opportunities in the Brooklyn meat market. However, the grueling hours and the long commute were hard on Tony and Vivian and their 5 young children. Those issues coupled with the changing atmosphere of the meat industry, Tony and his brother Johnny to answer an ad in the paper that read “Fast Food Restaurant For Sale at a Local Amusement Park.” Along with their dear friends and business partners, Peter Amoruso and Dominic Cosola, this partnership purchased what is now the Adventureland Restaurant in the late 1970s. Despite having limited experience in the restaurant industry, the foursome knew they had what it takes to run a successful business together.

Tony always said that a man is only successful when he can count on the support of his wife, and so with Vivian by his side, Tony was able to use his background in accounting to run and operate the financial end of the restaurant, while Johnny and Pete oversaw the day to day operations of the business and staff. In the early 1980s the opportunity arose to expand their involvement and invest in the running of the entire amusement park. The situation of the park was as grim as when the four-man partnership took over the restaurant. They decided this was a rare but wonderful opportunity; the restaurant had turned into a healthy business and they knew they were good partners. It was decided that Tony would manage the park, and Johnny and Peter would run the restaurant.

Fast forward to the 1990s; Adventureland established itself as a local landmark with new and innovative rides, live music and new games. During this time Tony and his team created community events like Pumpkin Park, designated as a safe Halloween event for Long Island families, developed philanthropic relationships with local nonprofits like The Helen Keller School and became more and more involved with community groups like Boy Scouts & Girl Scouts and Nassau-Suffolk Services for Autism. The Adventureland team decides to take on new business ventures in family entertainment, and with the help of long time associates Chip Cleary and Udo Stork, they build Splish Splash and Bullwinkle’s (now Boomers), both of which were sold in 1999.

Tony Gentile left behind a legacy that millions of Long Islanders continue to be a part of today; a legacy possible because of the support of his wife, Vivian, and their family. Adventureland, Splish Splash and Bullwinkle’s/Boomers were founded on the ideals of family fun close to home. Vivian and Tony’s philanthropy in the Long Island community continues through Adventureland and the Helping Hands Foundation. Today, Vivian and the children and grandchildren of the successful partnership are moving Adventureland forward and continue to bring the local landmark to the next level of Long Island family fun.

Tony was a successful businessman because he took chances and trusted in the honesty of people, but he was a great businessman because he was driven to succeed for the benefit of his family, friends and the community. The support and encouragement Tony received from his wife Vivian was the driving force of not only his career, but of his life. Her faith in him allowed him to take risks, explore business opportunities, and become the man he wanted to be. Tony and Vivian both wanted to give back to the community and people that supported their dreams. Tony and Vivian’s drive, passion, and integrity are what the Helping Hands Foundation Scholarship recipients embody.

Current Adventureland Employees can apply to receive a scholarship from the Vivian & Tony Gentile Scholarship Fund, however they must fill out a separate application, available on the Employee Portal Link below.

Click here to apply for a Non-Profit Night event!